Best things to do in Porto

Porto is the second biggest city in Portugal and is very rich in history, culture and architecture. Besides the world-famous Port wine, the city is also known for its excellent gastronomy and hospitable people.

Lately, it’s becoming a reference for entrepreneurship and technology, as several international startups are settling here. Porto is only 3 hours away from Lisbon, so if you’re in the Portuguese capital, you can quickly get here by train, bus or even a car.

Despite being hilly, the best way to get to know the city is still on foot. The truth is, you shouldn’t worry about following a strict plan. Read our tips and lose yourself in the narrow streets and alleys of Porto – you won’t regret it!

1. Go back in time at São Bento Train Station.

Even if you’re not taking the train, you shouldn’t miss São Bento station. It has been in operation since 1916, and it’s considered one of the most beautiful trains stations in the world.

The outside is already fascinating, but the interiors will amaze you. 20,000 azulejos tiles, portraying events of Portuguese history, cover the walls of the main hall. 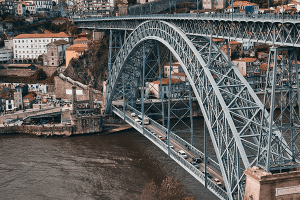 Porto is most famous for Port wine, which has been part of the city’s commerce and heritage since the 17th century.

You can take a guided tour at one of the many wine cellars in Vila Nova de Gaia and learn about their history and the production of the wine. And the best part? In the end, you will be able to taste different varieties of port wine.

One of the postcards of the city, Cais da Ribeira is always bustling with both tourists and locals. It offers a spectacular view of the D. Luís I bridge and the wine cellars at Vila Nova de Gaia.

Notice the typical Rabelo boats parked at the other side of the river. These boats used to transport the casks of Port wine from the vineyards in Alto Douro to the wine cellars.

Walk along the riverside and take your time exploring the narrow medieval streets, typical of this area. If you need a break, sit on one of the terraces and enjoy a cup of coffee or a glass of wine. 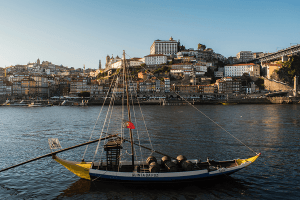 Typical rabelo boats that transport the casks of Port wine.

D. Luis I Bridge is one of those places that everyone quickly associates with Porto. The German engineer Théophile Seyrig designed this iconic bridge that opened to the public in 1886. He co-founded the Eiffel Company with Gustave Eiffel – the one that designed and built the Eiffel Tower!

From the upper deck, you have a privileged view of the Douro river curves, the colourful houses of Cais da Ribeira and the wine cellars of Vila Nova de Gaia.

Here’s a tip: walk to Jardim do Morro, at the end of the bridge – the view from there is also spectacular!

5. Get a new book at Livraria Lello.

Opened since 1906, Livraria Lello is well-known to have inspired J. K. Rowling when she started writing the Harry Potter books. You are likely to find several visitors waiting for an opportunity to take a photo on the red spiral staircase.

But even if you’re not a fan of the saga, Lello is definitely a must-see. The building itself is a work of art, combining three architecture styles: Neo-Gothic, Art Nouveau and Art Deco. You have to pay 5€ to enter the bookstore, but this amount is discounted from any purchase. 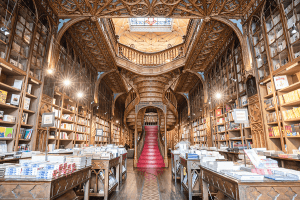 Interior of the Lello bookstore.

6. Take a walk in the Crystal Palace Gardens.

The gardens of the former Crystal Palace (replaced by the Rosa Mota Pavilion in the 1950s) date from the 19th century. Many locals come here to spend a pleasant morning or afternoon.

You will find several viewpoints with a fantastic view of the Douro river. If you’re lucky, you might even bump into one of the peacocks that live here.

7. Go to the top of Torre dos Clérigos.

Another Porto landmark, Torre dos Clérigos was built in the 18th century, between 1754 and 1763. The baroque bell tower is 75 metres high, giving amazing 360º views over the city.

To reach the top, you will have to climb 225 steps, but the view is sure rewarding. The ticket costs 5 euros, and the tower is open every day from 9 am to 7 pm (some days, it stays open until 11 pm). 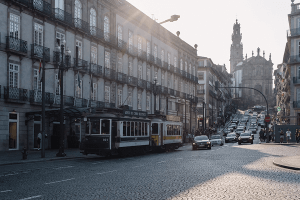 8. Have a picnic at Parque da Cidade.

Parque da Cidade is the largest urban park in Portugal. It has about 83 hectares of green areas rich in fauna and flora. The city park is fantastic for strolling, exercising or having a picnic with family and friends. You will find all kinds of animals, including ducks, swans and rabbits.

The park has a direct connection to Matosinhos beach and is the venue for the Primavera Sound music event.

Are you looking for student accommodation in Portugal? Talk to us! We have verified student rooms and apartments to rent in Lisbon, Évora and Porto! Book your accommodation online in our student housing platform.

Looking for something else?

Get direct offers
How it works