6 places you have to visit in Évora

Évora is one of the oldest and most enchanting cities in Portugal. Only 1h40 minutes from Lisbon, the city boasts Roman and medieval heritage, providing an interesting variety of attractions. It is the home for the second oldest university in Portugal, the University of Évora.

You can easily discover it on foot, appreciating the narrow cobblestone streets, the granite-wrapped arcades and the numerous squares. You can explore a lot by simply wandering around the centre and enjoying the traditional houses.

Whether you are living and studying in Évora, or just visiting the city, don’t miss these 6 places:

Évora’s 16th-century central square is the heart of town. To commemorate the aqueduct Água de Prata, a fountain with eight spouts was built on the square, with each of the spouts facing the streets leading to the square. It’s a place full of cafes and stores hiding under the arcades.

This Corinthian temple was built in the 1st century and is often considered one of the greatest and best-preserved Roman structures in the Iberian Peninsula. Right by the monument you can sit down, relax and enjoy a drink in Diana Garden while admiring the view of the city and the Alentejo landscape. 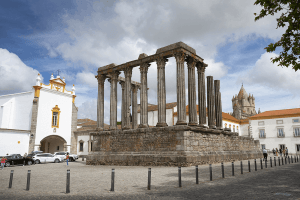 The Roman Temple of Évora.

It is the largest medieval cathedral in Portugal and it has no parallel in the rest of the country.

This pink granite cathedral was built in the 13th century, and the Gothic, Manueline and Baroque architectural styles are clearly visible. You can visit the cloisters and go up to the rooftop terrace to enjoy the panoramic view of the city.

One of Évora’s most visited sites, this unique chapel is part of the church of São Francisco. Its main features are its walls, arches and pillars covered with bones and skulls from floor to ceiling. It was built in the 18th century due to the high number of cemeteries that were keeping the city from expanding. 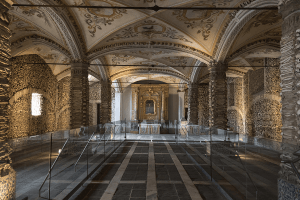 The Chapel of Bones, part of São Francisco Church.

Less than a 10-minute drive from Évora is this beautiful viewpoint to the city, where you can have a picnic and enjoy the sunset. There is also a Museological Center, an educational project that promotes the conservation of the natural and cultural heritage of the place. 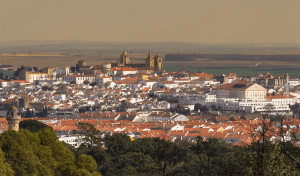 This aqueduct was one of the greatest architectural challenges of the 16th century in Portugal. It is 18km long, and you can walk through trails all along and enjoy the natural landscapes. The stone arches go all the way into the city centre where you can observe houses and shops built underneath or attached to the aqueduct. 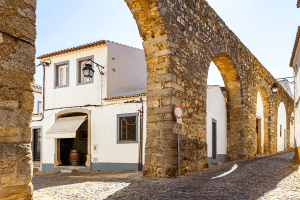 Are you looking for student accommodation in Évora? Talk to us! We have verified student rooms and apartments to rent in Évora! Book your accommodation online in our student housing platform.

Looking for something else?

Get direct offers
How it works